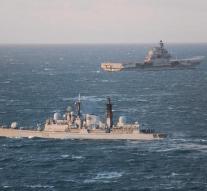 moscow - Russia will this autumn be any carrier committed to air strikes in Syria. This was announced by the state news agency Tass Saturday, invoking military sources. The 'Admiral Kuznetsov', with 306 meters the largest ship of the Russian Navy, will be from October to January in the Mediterranean patrol official to practice takeoffs and landings by fighter jets and the harassment of enemy targets on land.

The attacks from the sea complete the Moscow air support which the regime of President Bashar al-Assad has been using the Syrian base Hamaimim. Aboard the 'Kuznetsov', which was often out of service due to technical problems, according to the estimates will be about fifteen jets and ten helicopters.