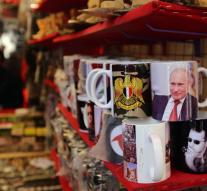 moscow - Russia suggests that a new political system in Syria is being prepared without President Bashar al- Assad is in charge of that process.

The government and opposition Assad should draft a new constitution within eighteen months. Then the Syrians to choose a new president. The Kremlin does not close the eight-point plan that Assad will participate in the elections.

Russia pushes forward the plan shortly before new international agreement on the civil war in Syria, which is to take place later this week.