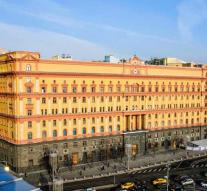 moscow - Agents of the Russian security service FSB have arrested six terrorists in the Moscow region who wanted to carry out attacks in the capital. According to the state media, they were controlled by leaders of Islamic State in Syria.

The jihadist cell received money from abroad and partly financed itself on the spot by criminal activities. The FSB said on Friday that the six were preparing attacks, the echo of which would be overdrawn. They would use bombs and firearms.