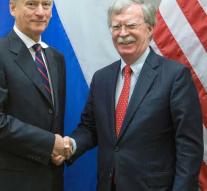 moscow - Russia and the United States are going to reopen communication lines between the two countries. The US National Security Adviser John Bolton and his Russian counterpart Nikolaj Patroesjev agreed, Russian media reported on the authority of Patroesev.

Both spoke in Geneva. Patcheshev invited his interlocutor to come and talk later in Russia. The communication channels that should be rehabilitated are in particular those between the Ministries of Defense and Foreign Affairs of both powers.

The two top executives eventually did not come up with a joint statement. That would be a result of the ongoing argument about the possible Russian interference in the American election campaign in 2016. The Kremlin states that it has nothing to do with it, if it has already happened.

Any Russian interference also spoiled part of the summit between Presidents Putin and Trump in July in Helsinki. Trump again made clear that he did not believe in the claims about Russian interference, but after fierce criticism from the home front, he scrambled back.

Russian Foreign Minister Sergey Lavrov accused Washington in a telephone conversation with his American colleague Mike Pompeo 'to have a destructive attitude' when it comes to cooperation with Russia. He also insisted on stopping 'the persecution' of the Russian Maria Boetina. She is trapped in the US because she would be a Russian agent.