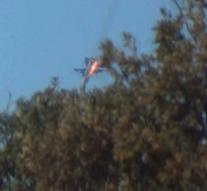 moscow - The Russian Defense Ministry said Friday in Moscow publicly opened the black box of the jet last month by Turkey was brought down in the border with Syria. This was reported by the British newspaper The Guardian.


A high-ranking officer then observed that the flight data recorder was damaged by the Turkish missile that struck the device. Russia wants to prove on the basis of information in the box that the device did not fly over Turkish territory when it was shot down.
The shooting down of the jet on November 24 led to a serious breakdown in the relationship between the two countries.
NEW