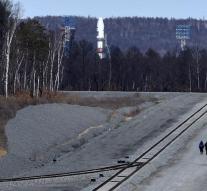 moscow - From the brand new Russian spaceport Vostotsjni Wednesday for the first time launched a rocket. The 'cosmological dream in the far east, near the border with China, Russia has another launch site for space within their own borders. So far does the Russian space using the Baikonur base, but which is in Kazakhstan.

The Soyuz rocket that took off from the launch site, spent three satellites in orbit, including a Moscow Lomonosov University. 'Today is an important day, not only for the university but also for the whole country and for science in general,' said the rector of the university.

Incidentally, Russia also simply continue to use Baikonur. With the new complex of the Russian space will be less dependent on the base in the neighboring country, a former Soviet republic. It is expected to take years from Vostotsjni manned space flight will depart.