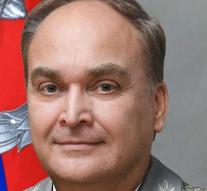 moscow - The Russian ambassador to Washington, Anatoli Antonov, has warned the US that jihadists will again have a chemical attack in scene to provoke American attacks on Syria. Antonov therefore urged his American interlocutors not to commit 'illegal aggression against Syria' again.

Antonov announced on Thursday that he spoke with American top officials, including Syria envoy James Jeffrey. Antonov called Monday's conversation 'constructive and professional. 'The US would already prepare for attacks on Syrian forces.

The terrorist group Tahrir al-Sham, previously known as the al-Nusra Front, wants to provoke these actions according to Russian intelligence services. For this, the group in the province of Idlib, which is controlled by jihadists, would undertake an attack with poison on civilians.