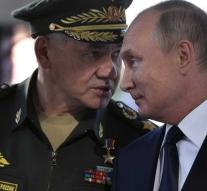 moscow - Russia will deliver the anti-aircraft system S-300 to Syria in two weeks. That will significantly increase the effectiveness of Syrian air defense, said Russian minister Sergey Sjojgoe (Defense). The system can hit multiple targets simultaneously at a distance of more than 250 kilometers, according to news agency TASS.

The decision follows the downing of a Russian aircraft at Syria. The Syrians accidentally shot the plane out of the sky trying to repel an Israeli attack. The Russian Ministry of Defense has blamed Israel for using the plane as a shield. The Israeli forces argued earlier that the Syrians were blindly firing.

Russia is now taking measures to prevent repetition. For example, Syrian air defense units are equipped with Russian tracking systems, says Sjojgoe. With this they can identify Russian devices. The Kremlin emphasizes that the delivery of the S-300 system is not directed against a 'third country'.