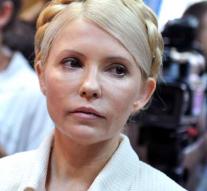 moscow - The Russian government has put many prominent Ukrainians on the sanction list. The punitive measures, according to Russian media, include politicians, judges, businessmen and senior government officials.

The sanctions are aimed at 68 organizations and 322 people, including former Prime Minister Yulia Tymoshenko and the son of President Petro Poroshenko. According to Moscow, it is a reaction to 'unfriendly' Ukrainian measures against Russian citizens and companies.

The relationship between Russia and Ukraine has deteriorated dramatically in recent years. This is due in part to the Russian annexation of the Crimea. Moscow also supports rebellious separatists in eastern Ukraine.