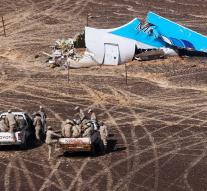 moscow - Russian intelligence knows which groups were behind a bomb attack in October on a Russian plane in Egypt. This was said by the head of service, Alexander Bortnikov, Thursday, according to Russian media. It is not clear what has Bortnikov groups in their sights.

When the bomb explosion at a Russian Airbus A321 over the Egyptian Sinai lost all 224 passengers, mostly Russian tourists, life.

The Sinai has long been active groups of jihadists who claim at the Islamic Caliphate (IS) to hear. These jihadists have already claimed responsibility for the attack earlier.