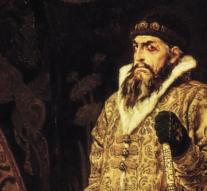 moscow - Russia is the first monarch with the title tsar of Russia, Ivan IV, known as Ivan the Terrible put in the limelight. In the Russian city of Orel, some 350 kilometers south of Moscow, is a monument to Ivan, who ruled Russia from 1533 to 1584, The Moscow Times reported.

The monument will be unveiled on August 3, two days before the 450th anniversary of the founding of the city, said Governor Vadim Potomsky.,, He founded the city 450 years ago. A city of great people, '' he added.

Ivan The Terrible is considered the founder of a centrally governed Russian State with a strong military rule. The first tsar was notorious for its extreme temperment. He killed his own son in a fit of rage and was the architect of the St. Basil's Cathedral in Moscow blind.