Home / World / Russia has to pay millions for Arctic Sunrise 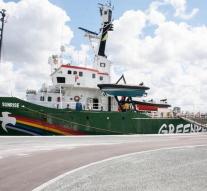 the hague - Russia has to pay nearly 5,4 million euros to the Netherlands because it put the greenpeace ship Arctic Sunrise under the Dutch flag in 2013. The Permanent Court of Arbitration in The Hague has determined that.

The tribunal had already ruled in 2015 that Russia had acted unlawfully with the capture of the ship and the arrest of the crew. The compensation now granted includes nearly 1.7 million euros due to the damage to the Arctic Sunrise and 600,000 euros due to the arrest and detention of crew members.

Among the thirty arrestors were two Dutchmen: campaign leader Faiza Oulahsen and chief engine room Mannes Ubels. The ship finally returned to Amsterdam in August 2014 after it was inoculated in September 2013 during a protest operation at a drilling rig of Russian state oil company Gazprom.

The Ministry of Foreign Affairs announces that the Netherlands has now asked Russia to pay the amount. 'The statements make it clear that ships in international waters can not simply be grafted and the detainees can be arrested. The Arctic Sunrise took advantage of the right to demonstration, 'said Minister Bert Koenders.