Home / World / Russia has aircraft carrier away from Syria 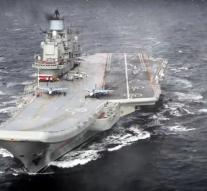 moscow - Russia has begun scaling back its military presence in Syria. First are the aircraft carrier Admiral Kuznetsov and its accompanying ships withdrawn. That the head of the Russian General Staff, Valery Gerasimov, Friday told the news agency Tass.

The Kuznetsov was in the Mediterranean Sea off the coast of Syria. President Vladimir Putin said in December that Russia had reduced its military presence in Syria agreed under the ceasefire agreement between Syrian opposition groups and the government of Syrian President Bashar al-Assad. Including air support of Russian warplanes Assad's forces gained an important victory over the rebels in the northern city of Aleppo.