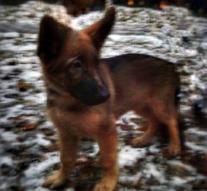 - German Shepherd puppy Dobrynya swapped Russia for France. The animal is a Russian gift after the attacks in Paris and its aftermath. At the large police operation in Saint-Denis on November 18 was the French police to Diesel. In solidarity Russia offered a replacement and that France has accepted, French media reported Friday.

" A very strong and extremely symbolic gesture on your part ", wrote the French Minister of Internal Affairs Bernard Cazeneuve in a letter to Moscow, published by the daily Le Parisien.

Dobrynya, named after a Russian medieval knight, is two months. When he leaves for France is not yet clear. German Shepherd gets French lessons, in order to grow in France into a fully fledged police.

The police action in Saint-Denis Three people, including the suspected mastermind behind the attacks in Paris, Abdelhamid Abaaoud.