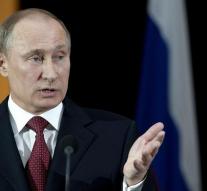 moscow - Russian President Vladimir Putin has extended the so-called 'opposition sanctions' against the European Union until the end of next year. This is evidenced by a presidential decree published on Friday.

Russia imposed sanctions in 2014 after the EU had decided to penalize Moscow economically because of Russian interference with the conflict in eastern Ukraine and the annexation of the Crimea. After the EU decided to enforce these penalties this week, the Kremlin extended its own sanctions a few days later.

By 2014, Russia has not taken more products like fruit, vegetables, fish, meat and dairy from many Western countries. This sanction affects, inter alia, the European agricultural sector: the Russians imported annual billions of euros for food and dairy from EU countries.