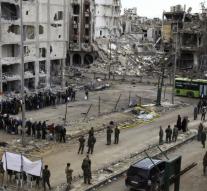 - Russia denies that it is in Syria bombing guilty of war crimes. Moscow responds to allegations by Amnesty International that claims to have evidence that the Russians use unguided bombs in densely populated areas and there is also using cluster bombs. Therefore unnecessary civilian casualties.

In a report, the human rights organization focused on six attacks on the cities of Homs, Idlib and Aleppo between September and November. Thereby surely came two hundred civilians and approximately sixteen fighters were killed. Would a mosque and a field hospital have been hit.

Cluster bombs scatter small bombs out. Their use is controversial and banned by many countries because they make a lot of civilian casualties. Russia should stop this and other illegal attacks , says director Philip Luther of Amnesty International.

The organization spoke to eyewitnesses and survivors of attacks. Also were video recordings and other material examined image with the help of weapons experts.

The Russian Defense Ministry dismissed the allegations Wednesday of the hand. The message of Amnesty consists according to the Department of counterfeits. Due to the use of words such as likely and possible The report is the text according to the Kremlin also vague and there is no concrete evidence.