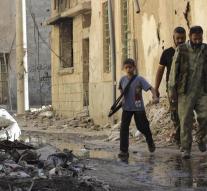 The Russian long-range bombers began bombing after they had flown over Iran and Iraq. According to the Russian Defense Ministry, all the goals they had in mind, destroyed.

IS has spent most of Deir al-Zor and around occupied since 2015, but Syria controls the airport and adjacent neighborhoods in the city on the Euphrates. In the besieged city by IS are approximately 110 000 people fixed.