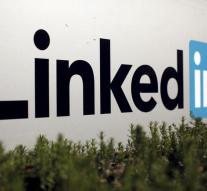 moscow - Russian Internet service customers may not give more access to LinkedIn. The Russian telecoms watchdog has given their mission Thursday to block Microsoft's business networking. LinkedIn violates privacy laws by storing data on Russian users on servers located abroad, according to authorities.

The network has tried in vain to prevent the blockage through the courts. About five million Russians have a profile on LinkedIn, about 1 percent of all users worldwide.