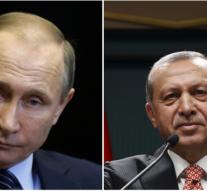 moscow - Russia and Turkey will gradually thaw their frozen relations in trade and economy.

This said Russian Deputy Prime Minister Arkady Dvorkovitsj Tuesday at the start of a meeting with his Turkish counterpart. Relations between the two countries were severely disrupted after Turkey had shot down a Russian bomber near the Syrian border in November last year.

,, We are here to improve our relations and even to lift to a higher level than to know November 24, 'Turkish Deputy Prime Minister Mehmet Simsek left in the Russian capital, citing the plane incident.