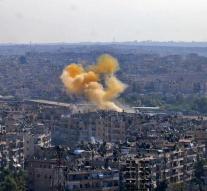 moscow - Russia on Friday, the Belgian ambassador in Moscow called on the carpet. The two countries have a disagreement on airstrike in Aleppo. Russia claims to have been killed by an attack of two Belgian F-16s civilians near the Syrian town. Belgium denies and is indignant.

Two Russian ministries, Defence and Foreign Affairs, saying that six civilians were killed by the Belgian shelling on October 18th. Moscow used that statement to show that the West applies double standards. It accuses Russia of such practices while it itself is guilty of bombing civilians.

While Ambassador Alex van Meeuwen Friday made the walk to the Kremlin, had his Russian counterpart in Brussels Wednesday already come to the Belgian Minister of Foreign Affairs to learn that Belgium this kind of accusations deems inappropriate. Although Belgium is part of the allied coalition led by the United States, but on the 18th there were no Belgian planes over the area in Aleppo, says Minister Reynders.