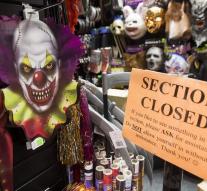 - Party Shops seem to benefit from the horror clown craze. A shopkeeper in Wateringen says hardly cope with the high demand for scary costumes and masks.

Party Shop 't party House has been around the shop window decorated with. According to owner Sander Nieuwenhuizen not only do the outfits for adults well, but walking around as children also like scary clown.

Against West Broadcasting let Nieuwenhuizen know not to feel responsible for what people do with the stuff.

Surfaced in several places in the country in the last few days here and horror clowns that people hunt wits. The trend to go on the street in a clown suit has come over from America. Such clowns have also been spotted in Australia, New Zealand and France.