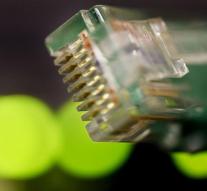 strasbourg - ISPs should make all online traffic basically the same speed. They differ from them only when there is a threat of congestion in the event of a cyber attack.

The European Parliament in Strasbourg on Tuesday gave the green light to the so-called Telecoms Package that it regulates. In June subject was already a preliminary agreement reached with the EU Member States and the European Commission.

Critics fear that despite a ' two-speed' internet ' is created. They also ask questions of exceptions to the rule that no provider can prioritize more for certain services. Thus, for example music services are offered without sounding of the internet bundle, the so-called zero rating.

Many Dutch MPs supported the package as the rules are less stringent than is the case in the Netherlands. Minister of Economic Affairs Henk Kamp had tried in vain to get passed the Dutch model of net neutrality. He should change the law now.

Among others, the EU parliamentarians D66, PvdA, VVD and GroenLinks voted against. The CDA also would have preferred a better text but gave support.

The package also provides for abolition of roaming charges from the mid- 2017 calls and internet abroad.