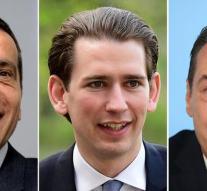 vienna - The Austrian electorate will go to the polls on Sunday to elect a new parliament. In May, a split between the coalition parties ÖVP and SPÖ occurred, which only became deeper after that. The conservative ÖVP led by Sebastian Kurz is likely to be the biggest party. The socio-democratic SPÖ and the right-populist FPÖ compete for place two.

At the previous elections in 2013, the FPÖ achieved more than 20 percent of the votes and is still in the elevator. Two green parties and the liberal Neos all float around 5 percent. The threshold for parliamentary elections is 4 percent.

Migration is one of the main themes in the elections. The FPÖ, who has twice been in government, wants to organize more popular councils more often and in advance claims the Ministry of the Interior. ÖVP leader Kurz wants a possible coalition partner to be a pro-European stance, but ÖVP and FPÖ both find that the EU should not interfere with too many matters.