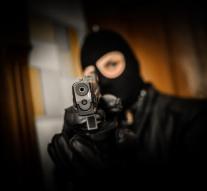 - The court in the German city of Mönchengladbach leaned Tuesday a remarkable claim. A robber demanded 5,000 euros satisfaction because he lost a testicle during a robbery at a gas station by a shot from the gun of a policeman.

The projectile penetrated through the bottom body of the robber inside, but hit upon leaving a testicle. Which had to be surgically removed. The robber said he had responded to an order from the police to drop his knife. The conscious policeman denies. He shot in self-defense at the robber, he said.

The judge proposed a compromise: 2,500 euros to compensate for the loss of the testicle. The parties have until November 8 to be together again.