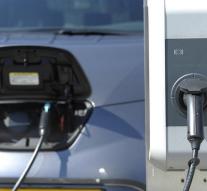 rotterdam - Rotterdam gets to work with the application of a technique that electric cars can be recharged wirelessly. After two years of preparatory work together with three companies, the congregation begins Tuesday with a trial. ' Especially at taxi ranks and bus stops, this may be an ideal way to recharge the battery, '' Hans looks Boat Engie Services Netherlands ahead.

The trial is being conducted in the area of ​​City Management Rotterdam with a specially converted vehicle.

Wireless technology works as follows: the test parking lot of City Management is an induction plate with a coil which transmits the electricity to the battery of the vehicle as indicated on the plate. Charging is activated with an app on your smartphone or tablet. The driver can sit while charging in the car. In the distant future expected Boat that cars can recharge while driving on roads which are equipped with this technology.

Rotterdam which itself raises a testing ground to put this technology into practice, reflects the determination of the city authorities to clean up the city, or have lower emissions in the city. ' We have a lot of charging stations, but perhaps we can in the future lay down a portion of the loading plates in Rotterdam to make it as easy as possible charging, '' said Alderman Pex Langenberg. ' Compare it with the electric toothbrush. You put him down and he charges. ''