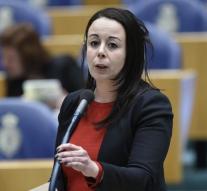 the hague - The Chamber remains with many questions about the cost of replacing the four Dutch submarines. D66's Salima Belhaj called the financial aspect of the project on Tuesday in the Chamber 'really worrying.' For the possible purchase, a minimum of 2.5 billion euros has been deducted.

The CDA thinks the minister is 'blurred about the budget,' said Raymond Knops. PVV Gabriëlle Popken would like to know what the Cabinet wants to pull out for the replacement of the four Walrus class boats. The PvdA, SP and GroenLinks sit with similar questions.

However, there is a majority to purchase new submarines. VVD and CDA are in the process, while the PVV is 'open' in the process. The D66 also seems to have no insensitive drawbacks. The PvdA was earlier in favor, but it is now 'no matter of course' that new submarines come, said Kirsten van den Hul.

Minister Jeanine Hennis of Defense emphasized that the replacement is still in the study phase. The next few months will be more clear about the costs. 'By now, insight into costs will increase. 'In the second half of next year, the study phase must be completed. A final decision on replacement will be in 2021. Between 2027 and 2031, the current submarines must then be replaced.