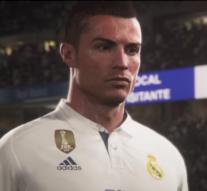 redwood city - Cristiano Ronaldo is the new face of the popular game series FIFA. The Portuguese sparkles in the first images launched by gamemaker EA Sports Monday. In addition, EA Sports announces on the official website that FIFA 18 will be performing on PlayStation 4, Xbox One, PC, Playstation 3 and Xbox 360 on September 29th.

It's the first time Ronaldo is the face of a FIFA game. The 32-year-old Real Madrid attacker was voted this year's World Footballer earlier this year. Shortly afterwards, EA Sports visited Ronaldo to make recordings. With the special motion capture package, EA could capture all of the Portuguese movements.

'We are very pleased that we have been able to work with Cristiano,' says Aaron McHardy, Senior Producer for EA Sports. 'By working with him, we learned a lot about his unique play style and what makes him so special. His passion, energy and global fan base make him the perfect ambassador for FIFA 18. '