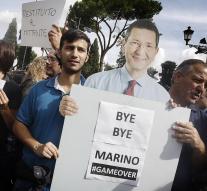 rome - Ignazio Marino is Thursday resigned as mayor of Rome . He was caught in a declaration scandal . The image of his Democratic Party, of which the Italian Prime Minister Matteo Renzi is a member , is too much violated , finds Marino.

Yet contradicts the former mayor accusations that he paid for by the 'eternal city' himself, his family and his friends has had a lot to eat and drink.

There is a claim of 20,000 euros on the table and Marino said that amount to pay to the last penny.