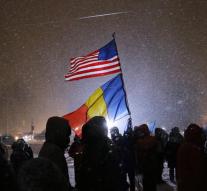 bucharest - The hold anti-government protests in Romania. More than 10,000 demonstrators took to Friday throughout the country to the streets to demand the resignation of the government.

It is the eleventh consecutive day the former Eastern bloc country has been the scene of demonstrations. The protests focused initially against a controversial measure to punish corruption less hard. This measure has been withdrawn in the meantime, is also the Minister of Justice, responsible for this change in the law, resigned. Nevertheless, the demonstrations continue.