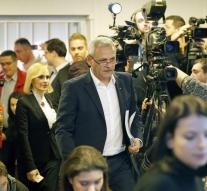 bucharest - A year after their prime minister had to resign reverse the Social Democrats in Romania back to power. According to exit polls, the leftist PSD won in Sunday's parliamentary elections around 45 percent of the vote, followed at a distance by the center-right PNL by about 21 percent.

Along with the left-liberal ALDE party, which was around 6 percent of the vote, the PSD can form a government. Who pushes forward the PSD as a candidate for prime minister is still unclear. Chairman and former Deputy Prime Minister Liviu Dragnea was convicted earlier this year because of manipulation of a referendum, while former Prime Minister Victor Ponta is suspected of corruption. President Klaus Iohannis will no prime minister who has been convicted or who are under investigation.

The new ecological party USR surprised by around 9 percent of the vote. The USR was established six years ago and is especially popular among young people.