Home / World / Romania is accusing the EU of a double standard 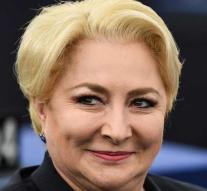 bucharest - The Romanian Prime Minister Viorica Dăncilă accuses Western European leaders of double standards with their criticism of her country about corruption and crackdown on anti-government protests.

Dăncilă, whose government currently holds the rotating presidency of the EU, said in an interview with the Politico news portal. eu corruption is also a problem in Western Europe. She also commented that there was no response from the EU leaders when the French riot police collided with demonstrators from the yellow vests movement. 'In Romania it is not allowed what other countries are allowed to do,' Dăncilă said.