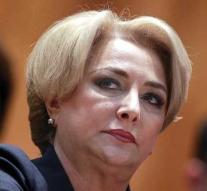 bucharest - The parliament of Romania agreed on Monday with the appointment of the social democrat Viorica Dancila as prime minister. She is the first female prime minister of the country. The parliamentarians also expressed confidence in the new cabinet.

Dancila got 186 votes in favor and 136 votes against. She will lead the third cabinet of the Social Democrats (PSD) and the Liberal Coalition Partner (ALDE) since the election victory in December 2016.

The previous government teams were killed because they were in collision with party chairman Livia Dragnea of ​​PSD about reforms of the legal system.