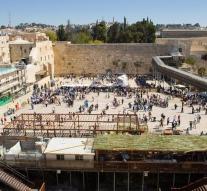 jerusalem - Israeli archaeologists first discovered a Roman theater at Jerusalem excavations. Also a piece of Wailing Wall was exposed that had been covered since 1700.

The theater has about two hundred places. This makes it quite small compared to other copies. The experts speak of a 'sensational find. 'Scientists have been searching for remains of Jerusalem for over 150 years for remains of public buildings that are mentioned in ancient writings.

The original mission of the mission was only to determine the exact age of one of the bays at the Temple Square. No one had taken into account that the 'secret of the theater of Jerusalem' would be desolate at work.