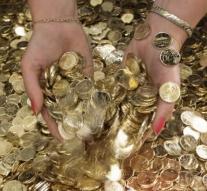 - A collection of Roman silver coins from the time of Mark Antony was found in a field in Wales, about 2000 years after it was buried. The treasure, according to experts, worth tens of thousands of euros and was found by two friends with metal detectors.

The 91 coins were issued in two hundred years. The oldest is from 31 BC, at the time of Mark Antony, a key ally of Julius Caesar. The youngest coin bears the image of Marcus Aurelius, who ruled from 161 to 180 AD.

" What kind of money at that time was about a day's wage, so the treasure represents a substantial amount of money ", said Edward Besly of the National Museum Wales Friday told The Telegraph.

The value of the treasure probably goes to the two finders and the landowner.