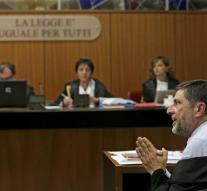 rome - An Italian court sentenced the heads of a mafia-like gang from Rome on Thursday to long imprisonment. Massimo Carminati, a former terrorist with right-wing sympathies and the nickname 'One Eye', has to enter the cell for twenty years. His companion Salvatore Buzzi got nineteen years.

The rumor has been running since November 2015. A total of 46 people from the Roman underworld, local politics and business world were right. The members of the so-called Capital Mafia, a network of corrupt politicians, light entrepreneurs and heavy criminals, shared the public procurement in Rome for many years and plundered the city council. The end of 2014 was the lucrative game.