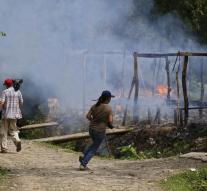 naypyidaw - Rohingya insurgents in Myanmar have declared a ceasefire of a month to enter Sunday. The strike-fire must allow emergency workers to help victims of the conflict in northwestern Myanmar.

At the end of August, Rohingya insurgents attacked dozens of police stations and army base in the state of Rakhine. The subsequent collisions and a military counteroffensive caused a true exodus. Nearly 300,000 Rohingya have fled to neighboring Bangladesh.

In the area thousands of Rohingya houses have been burned. According to the Government of Myanmar, that is the work of armed Muslim groups. Human rights organizations and Rohingya blame the army.

What will be the effect of the truce is not clear. The insurgents do not seem to be a party to the soldiers.