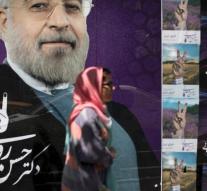 teheran - President Hassan Rohani told TV on Saturday that the Iranian presidential election has demonstrated that the Islamic Republic wants to interact with the international community. In his first speech after his re-election, Rohani said that voting has made it clear that the Iranians have put down the calls of the hardliners to stop the reforms next to themselves.