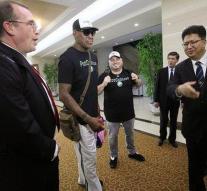 london - American basketball legend Dennis Rodman would like to contribute to reducing tension around North Korea. He said in the British program Good Morning Britain that he wants to ensure 'everyone can find it.'

Rodman spent several visits to North Korean dictator Kim Jong-un in the past. He looks happy back on those trips. 'We're laughing, singing karaoke, we're doing a lot of cool stuff together,' said the former top athlete. 'We drive on horses, hang around, go skiing and rarely talk about politics. '

The American described his visits to the dictatorship rather as 'basketball diplomacy'. He regards ruler Kim Jong-un as a 'friend of life'. The dictator is known as a great basketball enthusiast.