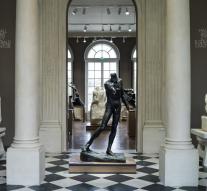 - After three years of renovation reopens the Musée Rodin in Paris this week the doors to new presentations of works by the French sculptor. Right in the center of the French capital, Auguste Rodin used the Hotel Biron and the garden as a studio in the years before his death in 1917.

The site contains versions of ' The Thinker' and 'The Kiss ', two world famous sculptures. The mansion attracts 700 000 visitors and had 16 million needed for the renovation, including a restoration of the floor and the interior.

The museum now has a completely new layout and previously never before exhibited works and paintings from the personal collection of Rodin, including paintings by Vincent van Gogh and Edvard Munch. The new layout and a different lighting, there is now a better visibility on the work, said museum director Catherine Chevillot.

The project was partly funded by the casting of new bronzes from original molds of Rodin, she said. The French state contributed almost half of the expenses, the rest came from its own resources.