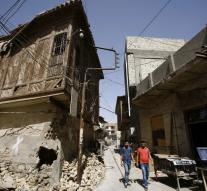 baghdad - About fifteen rockets have landed Thursday in and around a camp of Iranian exiles in Baghdad. That said a spokesman for the Iraqi army. It is still unclear whether and how many victims there are cases. Some media report that nothing is known about casualties. Other media, including Fox News, saying that there are fourteen dead and dozens wounded. It is still unclear if the camp is deliberately attacked.

It's about the camp on the old US military base Camp Liberty, near Baghdad airport. The exiles have been living since the time of former dictator Saddam Hussein in Iraq. The opponents of the Iranian Shiite religious leaders. Under the new Shiite-dominated Iraqi government, but they are actually no longer welcome in the neighboring country. They live since 2012 at Camp Liberty.