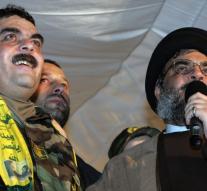 - Three rockets were fired on Sunday in northern Israel from Lebanon smashed. No one was injured. The rocket attack follows according to the newspaper Haaretz did not happen to the death of a leading member of the Lebanese Shiite movement Hezbollah, Samir Kuntar, in an Israeli air raid near the Syrian capital Damascus. Israel on Sunday evening with artillery bombarded targets in Lebanon in retaliation for the three rockets.

Hezbollah reported that Israeli planes have bombed Sunday the Jaramana suburb southeast of Damascus. In addition, both civilians and slain Hezbollah fighters, including Kuntar. Lebanese Kuntar was convicted in Israel of terrorism and was almost thirty years in prison in 2008 when he was traded for the remains of Israeli soldiers killed in Lebanon. According to a local militia in Jaramana which is loyal to Assad, the Israeli attack four missiles targeted a house in the suburb and a deliberate assassination Kuntar.

Israel has not admitted having carried out the air strike. The observers more often bombarded Hezbollah in Syria. The movement Hezbollah militias are an important part of the armed forces of Syrian President Bashar al-Assad.

The Syrian civil war broke out in 2011 has taken a heavy toll of Assad's army. Hezbollah and Iran offset along with the massive Russian air attacks dwindled Syrian forces in the protracted civil war. Israel would, according commentaries in Israeli media with the attack on Kuntar clearly manifest against Hezbollah, Assad and especially against Iran.