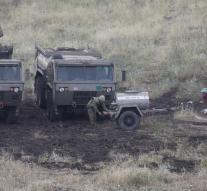 beirut - The rocket attack by Israel on an Iranian base in Syria, according to the Syrian Observatory for Human Rights, certainly killed fourteen people. According to the British-based organization, eight Iranians are among the dead.

The target of the rocket attack was an army base south of the capital Damascus. According to the observatory, Hizbullah and Iran, Assad's allies, said the base would be used as a weapon depot.

The attack came a few hours after US President Donald Trump announced that his country was canceling the agreement on Iran's nuclear program.