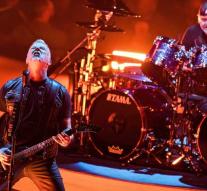 - The American rock group Metallica brings its own whiskey on the market. According to a statement from the group, it is not just a different name for an already existing mediocre whiskey, but a real drink that has been worked on for years.

There was the experience of whiskey connoisseur and maker Dave Pickerell with whom the rock group worked together on the liquor. Special: the drink is matured in barrels in spaces where Metallica music shines and is named after a song from the group on the album And Justice for All from 1988: Blackened.

The drink will be offered for sale in the fall. The pop group launched its first music in 1982, but now also wears other goods, such as watches. The choice of spirits is not bad, based on the business success that George Clooney, for example, booked with his Tequila.