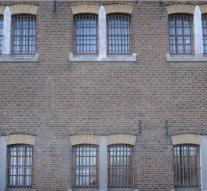 brussels - Due to a technical problem with the lock of his cell in Brussels a robber could casually walk out. The man is missing.

The man had a companion committed an armed robbery at a pharmacy. They were shortly afterwards seen when they took a bus and arrested. The duo revealed a bag of money and a gun to contribute themselves, Belgian media report Tuesday.

The two were taken to the police station in the Brussels municipality of Forest, but officers noticed a little later that one of them off. Apparently no one noticed him as he walked out.