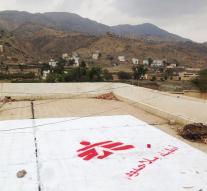 - The coalition of Sunni Gulf states helping the Yemeni government in its fight against the Houthi rebels want an urgent meeting with MSF. The Alliance regrets the decision of the NGO to withdraw from northern Yemen. MSF decided to do this again after an airstrike on one of its hospitals.

Sunni alliance, which is led by Saudi Arabia, claims to be committed to international humanitarian law. An independent commission would have been commissioned all events in Yemen in which civilians have died to investigate.

,, The coalition is trying to hold urgent consultations with MSF to jointly find a solution in this situation, '' she told the Saudi state news agency SPA.


The airstrike Tuesday in an MSF hospital in northern Yemen took nineteen lives.