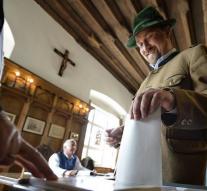 berlin - The rise for the Bundestag elections on Sunday afternoon in Germany was almost the same as in the previous elections in 2013. At 14.00, 41.1 percent of the electorate voted, the federal electoral commission in Wiesbaden announced. Four years ago it was 41.4 percent at the same time.

The gap is based on the rate of return at selected polling stations. Votes posted by post are not counted here. This year, a record number of postal votes is expected.