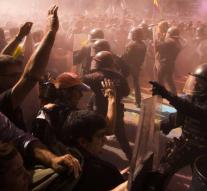 barcelona - Two days before the anniversary of the illegal Catalan independence referendum, riots broke out in Barcelona. Separatist demonstrators got into trouble with the Catalan police when they were on their way to a protest march of the national police and Guardia Civil, elsewhere in the city center.

According to Spanish media, the separatists threw paint and eggs to the police. At least two protesters have been arrested.

The Catalan police formed a cordon to keep the separatist demonstrations and those of the central state security services separate. Many of the approximately 6,000 separatists had tried to break the blockade by force.