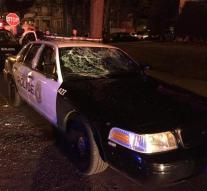 - In the US city of Milwaukee are Saturday (local time) riots arose after police shot dead a suspect.

Police stopped Saturday afternoon during a traffic a 23-year-old man, which led to a chase. The armed man was shot dead. It is not known what was the background of the man, but the incident happened in an impoverished neighborhood where mostly live Afro-Americans. Nor is it clear whether the suspect has shot himself or threatened with his gun.

Angry citizens took to the streets after the shooting and set a police car on fire. Also, fire was set in two different places.


,, This is a warning, 'said Deputy Mayor of Milwaukee Khalif Rainey.,, The blacks in Milwaukee are tired. They are tired of living with oppression. '