Home / World / Riots in India because of new Bollywood film 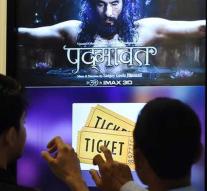 new delhi - The approaching premiere of a controversial Bollywood film leads to riots in India. The police have acted against rioters in several places.

The film Padmaavat premieres Thursday, but has already led to anger at some Hindu groups. They complain that the makers are distorting history. The film would contain a romance between a Hindu chief and a Muslim ruler. The filmmakers deny that.

Several states wanted to ban the film because they feared riots, but the Supreme Court did not participate. In the meantime the unrest continues to increase. Agents flew into the air on Tuesday to disperse groups of demonstrators in the state of Gujarat. There, dozens of vehicles went up in flames during protests. The police arrested about twenty suspects.

Demonstrators also took to the streets in the city of Gurgaon, near New Delhi. On television images you can see groups of young men throwing stones. A local police officer said that fifteen people were arrested. 'We do not tolerate people using violence in the name of protests against a film,' he emphasized.

In Mumbai, the authorities do not seem to want to leave anything to chance. A senior police officer in the metropolis said that, as a precaution, more than a hundred members of protest movements were detained. The authorities also take measures to protect cinemas that show the film. The police also monitor social media.

Padmaavat will also be on show in Utrecht, The Hague, Rotterdam and Amsterdam from the end of this week.