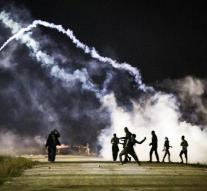 - Even before the official start evictions of so-called jungle in Calais, riots have already emerged. In the night from Saturday to Sunday is thrown stones at the police, the French news channel BFMTV reported.

The French government wants to officially clear the controversial camp since Monday. Live according to official figures, some 6,500 illegal immigrants who want to leave it as quickly as possible to the UK. The refugees are from Monday with buses brought to various reception centers in France.

live in the jungle, the authorities also some 200 activists from the No Border movement, which advocates a world without borders.